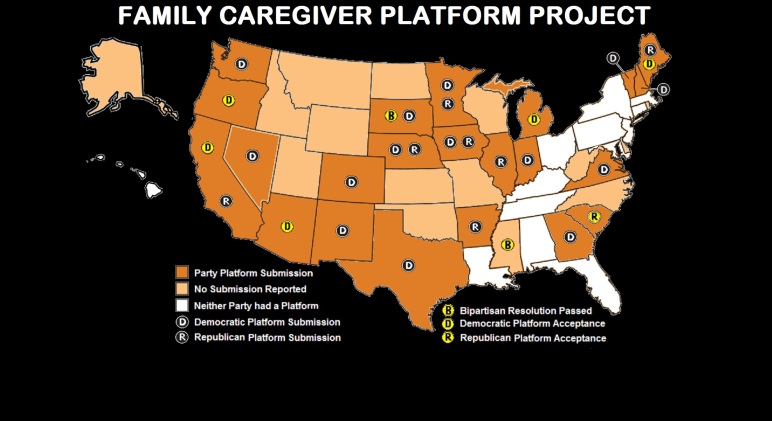 In 2016, the election of our nation’s 45th President captured the world’s political attention. During that political season we operated the bipartisan Family Caregiver Platform Project, which encouraged the inclusion of caregiving as an issue in party platforms. In an effort to recap what we learned and highlight our success, the Family Caregiver Platform Project published an article in The Journal of American Geriatrics Society that you can read at:

Here is a recap of our primary findings.

The Family Caregiver Platform Project aims to reach individual volunteers and organizations to raise awareness of family caregivers through the platform process for both the Democratic and Republican Parties. The value of the project is measured not solely in the number of platforms that formally adopt platform language, but also in the dialogue and discussion that advocates and organizations stimulate in a political arena that has historically been silent on caregiver issues. Most state parties update their platforms in Presidential election years, articulating their values and beliefs when national political interest is at its peak.

By September, 2016, many state parties and both the Republican and the Democratic national parties formed platforms. The Family Caregiver Platform Party was widely successful in creating awareness for family caregivers in numerous states across the country.

State political parties will continue meeting and discussing their values and priorities in 2017. In 2017, the Democratic parties in Massachusetts and Utah will be updating their party platforms. In addition to party internal work, we expect to see a broad range of legislative initiatives across the country that will affect caregivers at the national, state, and local levels.

Our democracy depends on participation by involved and informed citizens. The FCPP continues to support bipartisan efforts to raise awareness of caregiving as a core family value that can unite all Americans.

The FCPP was a 2016 project to help get family caregiving recognized as a key issue in party platforms across the United States. We were a nonpartisan project, reaching out to all political parties to make sure caregiving issues were  heard at the local, state, and national level. This is an archival site as the project is not currently active.